My exploration of the early history of the teddy bear in New Zealand is continued from this earlier post.

From a twenty-first century perspective, the policies of United States President Theodore Roosevelt (who disliked the widespread use of ‘Teddy’ as his nickname) can seem a strange mixture of the admirable and the appalling. He was a pioneering conservationist, and supported an activist state that intervened to curb the power of big business and to protect consumers and workers. At the same time, he was a proponent of the United States’s imperial expansion in the 1890s and fought in the Spanish-American War of 1898. As President, he promoted an assertive foreign policy in which diplomacy was backed by military power. He was also a eugenicist who believed (like many white people of his age) in the superiority of white people from Northern Europe.

The story of Roosevelt refusing to shoot the bear, that led to the creation of the teddy bear, nicely illustrates some of the complexities of Roosevelt’s public persona. On the one hand, he was the keen big-game hunter and hyper-masculine man of action. On the other, he was the protector of wild places, animals and plants, and supporter of the underdog (or, in this case, the under-bear). The story, in which Roosevelt is armed but chooses not to use his weapons, also aligned well with his foreign policy strategy of negotiation underpinned by the threat of military might: the strategy he famously described as ‘speak softly and carry a big stick’.

Roosevelt’s best-known link to New Zealand, perhaps, is his 1905 gift of wapiti deer to this country (wapiti remain at large in Fiordland in the South Island). However, one of Roosevelt’s most notable instances of ‘big stick’ diplomacy also involved New Zealand. In August 1908, sixteen United States battleships nicknamed the ‘Great White Fleet’ arrived in New Zealand, as part of a global tour aimed at demonstrating America’s naval strength. Roosevelt, a long-time supporter of naval power, dispatched the fleet at a time when Japan had recently demonstrated its naval prowess in the Russo-Japanese War. (Roosevelt won the Nobel Peace Prize in 1906 for his role in negotiating a peace treaty between Japan and Russia.)

The fleet’s visit to Auckland was a major event, lasting almost a week. Large crowds turned out to welcome the visitors, as did most Members of Parliament, who travelled up from Wellington for the occasion. The visit was also extensively reported in the newspapers. Although New Zealand was still strongly British in its political and cultural orientation, the Americans were generally welcomed as ‘cousins’ who belonged to the same race as British New Zealanders. The nickname of the ‘Great White Fleet’ ostensibly referred to the ships’ white-painted hulls, but there was also a clear racial dimension to the name. There was much talk during the visit of Anglo-Saxon racial solidarity in the face of potential threats from ‘Asiatic’ powers.

Māori occupied a somewhat ambiguous position in the midst of this emphasis on whiteness during the visit. Theodore Roosevelt himself had referred to Māori in his multi-volume work The Winning of the West, writing that war with ‘savage’ peoples was brutal and inhuman but also necessary:

American and Indian, Boer and Zulu, Cossack and Tartar, New Zealander and Maori — in each case the victor, horrible though many of his deeds are, has laid the foundations for the future greatness of a mighty people.

By 1908, such warfare was considered safely in the past by the New Zealand and United States Governments. The Māori King Mahuta was among those who met Rear-Admiral Sperry, the fleet commander. Sperry referred to his earlier visit to New Zealand in 1869 (when the New Zealand Wars were still being fought) and said he was ‘right glad that such good feeling’ now existed between Māori and Pākehā.

Before and during the fleet’s visit to New Zealand, there was much discussion about the relative positions of Māori, Native Americans and African-Americans. The New Zealand Herald quoted an American naval officer, who described Māori as:

the finest aboriginal race we have yet come across. They are quick and intelligent, and have a history which everyone should admire. We, at any rate, admire them, and to demonstrate this I can quote no better instance than the fact that many of our officers last night danced with them — a thing we would never do with the negroes.

There were, in fact, some African-Americans serving in the US Navy at this time (including in the ‘Great White Fleet’), but only in subordinate positions and with segregated eating and sleeping arrangements.

If black people were not welcome among the white American sailors, however, black bears were a different matter. The American battleships had bears on board as mascots, and these attracted great interest. The New Zealand Herald reported that the bears were:

evidently feeling the effects of too much hospitality. They have had a surfeit of peanuts, lollies, and other trifles during their stay in Auckland, and are now, most of them, suffering from indigestion…

The continuing association of bears with Roosevelt was apparent from the reply of an American sailor when asked by a teenage girl if Roosevelt was in command of the ships in battle: ‘If he ain’t making a speech or hunting wild ba-ars, he is, miss.’ The bear on the USS Minnesota was a black cub called Teddy, who was seen ‘strutting up and down the deck wearing a marine’s hat, a miniature officer’s belt, and a sword.’ He slept in a box, wrapped in blankets, and was fed mostly on malted milk.

Bears occupy a curious position in the imagination of European and European-derived cultures. On the one hand, they are powerful and dangerous wild beasts, and are to be feared. On the other, they are imagined as cute, furry and cuddly creatures. Their ability to stand on their hind legs makes them all the more terrifying and yet also easier to anthropomorphise. Taming or domesticating bears is a way of reconciling these contradictions. In zoos, or in circuses or other types of performance, bears can present an enjoyable spectacle while still retaining a slight edge of menace. In popular culture, bears have often been metaphorically declawed, becoming benign and charming: whether characters in children’s stories such as Winnie-the-Pooh or Paddington, cartoon bears like Yogi, the Three Bears of the Goldilocks fairy tale (though these bears were more threatening in earlier versions of the tale), or dancing bears in whimsical songs (far removed from the cruel reality of bears that are taught to ‘dance’).

The teddy bear is the ultimate domesticated bear: so far removed from its animal origins that it’s difficult to even recognise it as a bear. The teddy bear hunts taking place during the COVID-19 lockdown, however, draw their inspiration from the children’s book We’re Going on a Bear Hunt (1989) by Michael Rosen and Helen Oxenbury, in which (despite the characters’ repeated self-reassurance that ‘we’re not scared’) the bear is actually something to be feared. The COVID-19 virus, which is believed to have originated with wild animals, shows the limits of our efforts to tame and domesticate the natural world.

There are no teddy bears in my household, but I have put my cherished childhood companion, Puppy, in the window. There was no social distancing between me and Puppy when I was growing up: he has been hugged to within an inch of his life, and is now a creature of patches and bandages, like some sort of lovable A&E pirate. 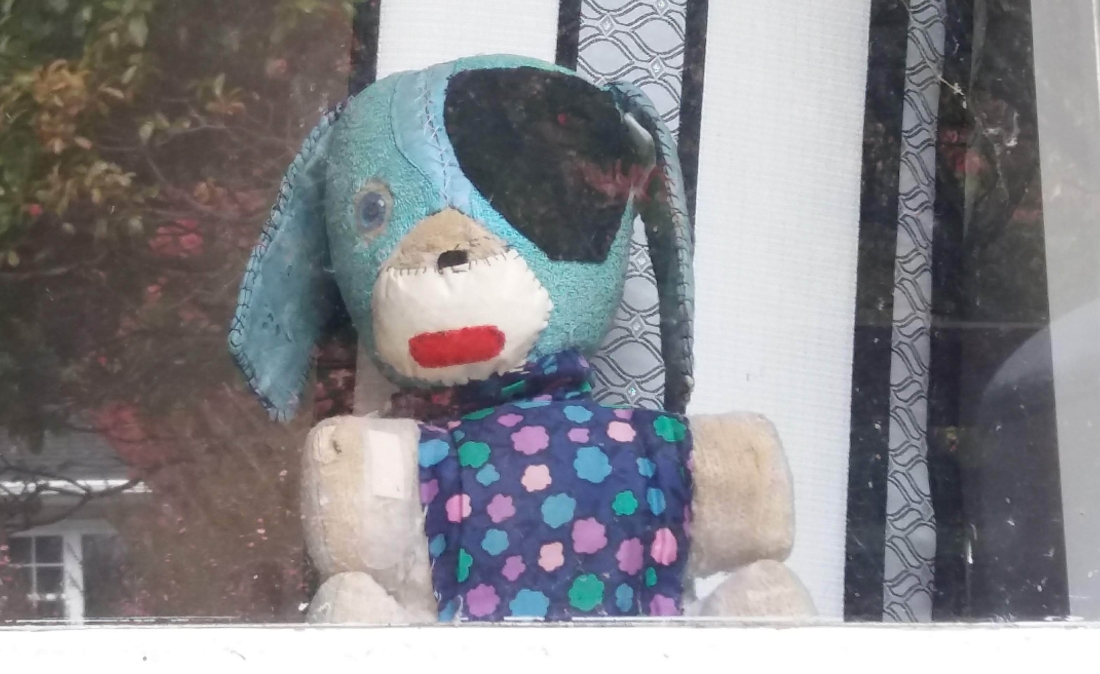 How much is that doggy in the window? Priceless.