I spent a very pleasant Christmas day with my in-laws. In the evening, with stomachs groaning from the Christmas feast, we looked through some of my mother-in-law’s cookbooks from different eras, and I was particularly struck by this advertisement for ‘Pakeha, the cream of butters’ from the Feilding Plunket Society Recipe Book of 1930. 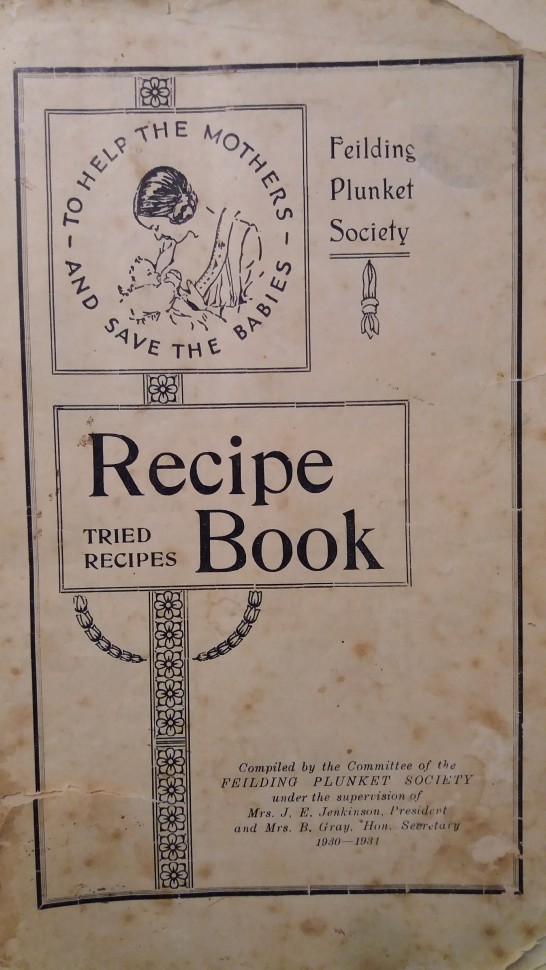 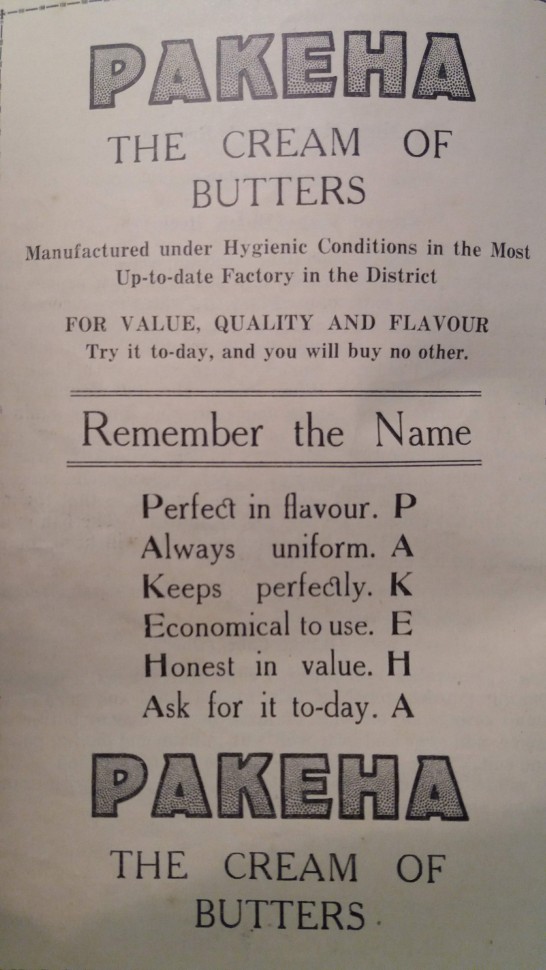 Today, some people insist on believing that the use of the word ‘Pākehā’ to describe New Zealanders of European descent is derogatory or demeaning. This view isn’t entirely new. In 1946, for example, Mr Algie, the National MP for Remuera, declared in Parliament that he had ‘a rooted objection to the word “pakeha”‘, which had ‘a meaning that was far from complimentary’.

I won’t go into the different interpretations of the word here, except to say that it has no clearly established derivation. What’s particularly interesting, however, is that the use of ‘Pākehā’ by many white New Zealanders, both today and in the past, is a rare example of settlers and their descendants adopting an indigenous term to describe themselves.

Still, it’s hard to know what lay behind the choice of the word as a brand name for butter. Was it a reference to the butter’s pale colour? Or to an association of racial whiteness with wholesomeness? Was it a sign of nascent nationalism, of the search for an indigenous identity for white New Zealanders? Or was it the exoticism of the word to British ears that appealed, bearing in mind that this butter was intended primarily for export to Britain?

Unfortunately, the report in the Feilding Star of the first meeting in September 1893 of shareholders of the Cheltenham Co-operative Dairy Company Limited is no help, as the decision to use the word ‘Pakeha’ as the company’s brand was announced with no explanation. You can read more about the history of the company, and its use of the Pakeha brand in association with a fern logo, on the Feilding Coach House Museum blog, which conveniently posted about Pakeha butter just a few days ago.

The production of Pakeha butter was a significant source of local pride and employment for Feilding, as this advertisement in the Manawatu Standard indicates:

In the dairy factory we saw great 56 lb blocks of butter packed into white pine boxes with the fernleaf trademark and the brand name ‘Pakeha’ impressed with a roller on the butter before sealing and nailing. It was going elsewhere — by rail to Wellington and by ship to Great Britain, a distant place but not a strange one, for week by week letters, newspapers and parcels arrived from aunts and cousins who lived there. In our own tiny domestic economy, the cardboard boxes of Angora wool went to England; the wages my father earned (for a time) at the freezing works were for processing animal products for export… . The little scatter of houses along Makino Road, the dairy factory and the railway siding were a focal point in a world of linkages and flows.

The factory building is still on Makino Road today, though butter is no longer made there. 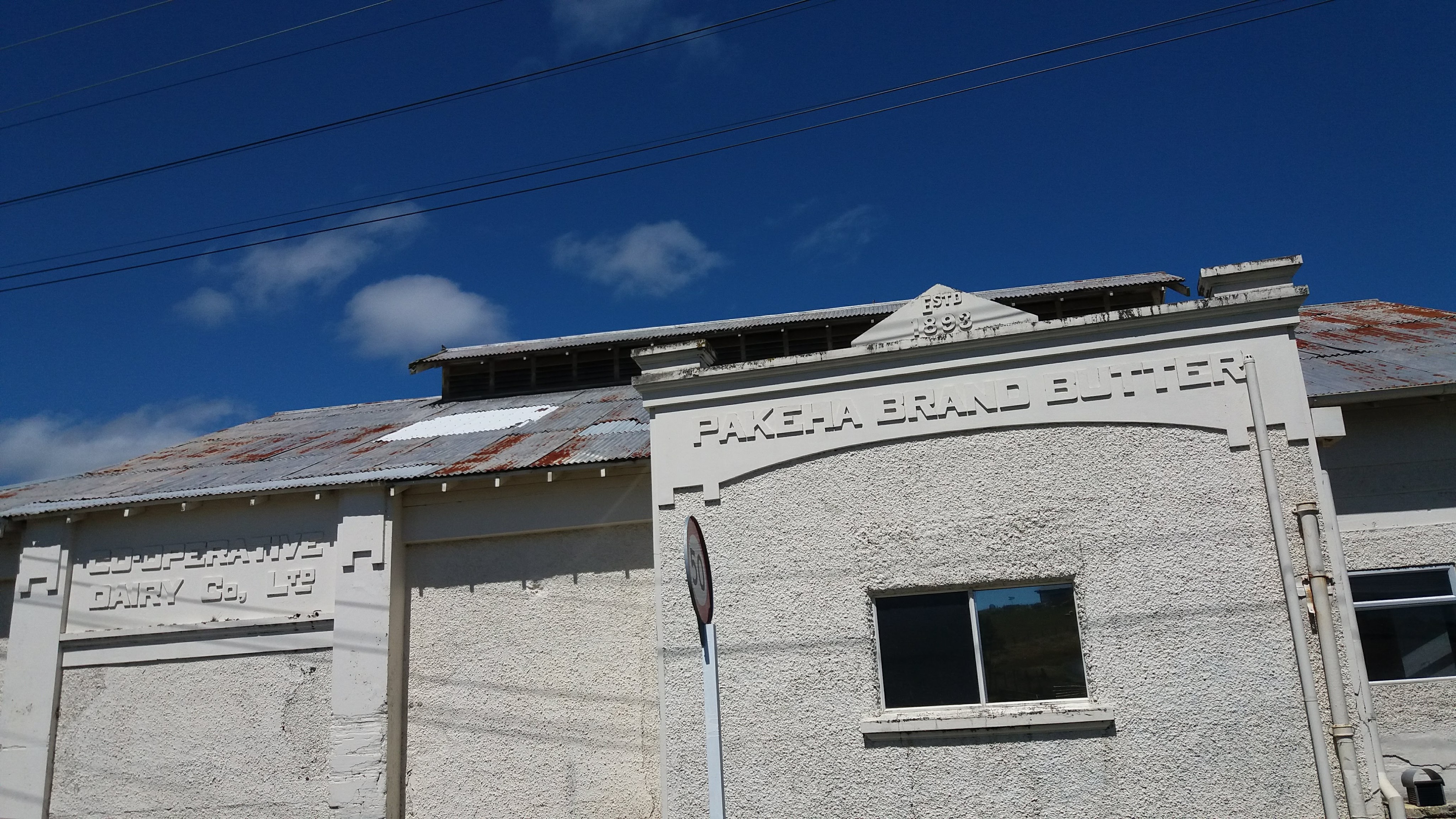 What, I wonder, did the tangata whenua of the Feilding district make of the name ‘Pakeha’ on the dairy factory wall? I don’t know whether any Māori worked in, or supplied milk to, the dairy factory. They did, however, work in the local freezing works. Another of Feilding’s famous sons, the former Chair of the Waitangi Tribunal Edward Taihakurei (Eddie) Durie, remembers a world that overlapped with, but was also quite distinct from, that experienced by Bill Oliver.

[W]hat really struck me, was that some of our most senior elders in Ngāti Kauwhata — people who held real status on the marae — were nothing in the freezing works. They were just workers on the chain. And while the industry was pretty good in the way it employed Māori, and made pork bones available for tangi, I could see that people who we admired and respected enormously as children, were not recognised outside of our marae.

The other side of that was that few Pākehā leaders had ever set foot on a marae. One memory that stands out is that, in about 1950, the Mayor of Feilding came on to our marae, because he knew the person who’d died. Everyone was impressed by that. But the mayor was in a hurry, and he walked straight on to the marae. Not waiting for the call. Not waiting at the gate. It wasn’t his fault. No one had told him. He didn’t know what the procedure was.

…[T]hat was how things were back then, when officials who had a significant say over the lives of our people hadn’t even been on to the marae.

While Pakeha butter was also marketed to New Zealanders, it was above all a product for the British market. In 1897, only four years after the dairy company was established, The Cyclopedia of New Zealand was already reporting that the company ‘has a large contract in the Old Country, which absorbs the greater part of the butter produced’. Butter was an important export product for New Zealand, its success made possible by refrigeration. Government regulation of dairying began in the 1890s and farmer-owned dairy cooperatives began to flourish. Butter grew from 2% of New Zealand export earnings in 1895 to almost 19% in 1925 and 30% by 1935. The Cheltenham Dairy Company illustrated this growth, expanding production from 34 tons in the 1893-94 season to 2861 tons in 1935-36. Little wonder that the company boasted of its contribution to ‘Feilding Progress’ during New Zealand’s centennial year, 1940.

New Zealanders themselves were great butter-eaters, and butter was essential to their great love of cakes and biscuits. But New Zealand butter was also very important in Britain. Historian Lizzie Collingham argues that New Zealand butter, cheese and meat, along with imported products from other parts of the Empire, played a significant role in improving the diet of working-class Britons. The downside for New Zealand was a strong reliance on the British market to purchase a narrow range of agricultural products. By 1970, Britain was purchasing 90% of New Zealand’s butter exports, and this presented significant challenges for New Zealand when the UK joined the European Economic Community in 1973.

Another recipe that caught my eye while looking through the old cookbooks was this one for Empire Christmas pudding. 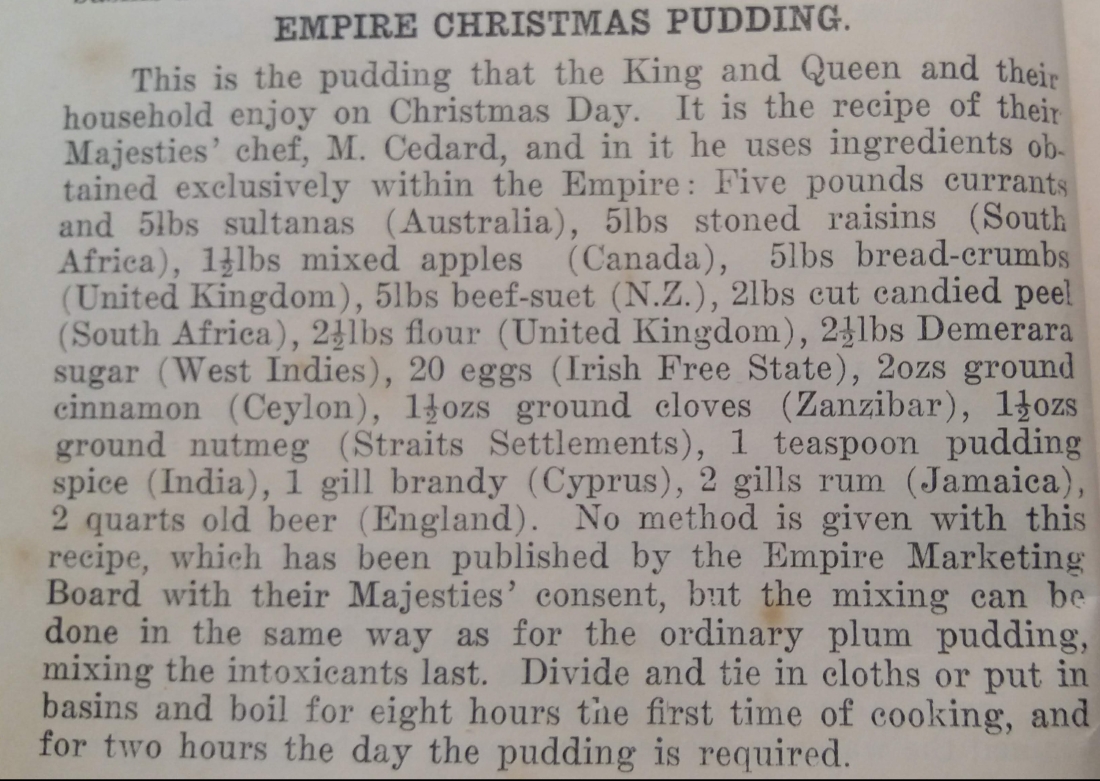 (Unfortunately the cover of this book was missing, so I’m unable to identify the book or the publication date.)

As with Pakeha butter, the Empire Christmas pudding shows how New Zealand was connected by both economics and sentiment to the wider British world. The celebration of Christmas itself linked New Zealand to Britain and Ireland, where most New Zealand Christmas traditions originated. As Alison Clarke writes in her history of holiday seasons in nineteenth-century New Zealand, the Christmas plum pudding ‘assumed iconic significance for English colonists, featuring as the most recurrent image of Christmas in diaries, letters, reminiscences, newspaper reports, poems and stories.’ But the 1920s saw a more conscious use of the Christmas pudding to promote ties, and particularly trade connections, between Britain and its Empire.

Concerned about competition from American and other ‘non-British’ producers, the British Women’s Patriotic League and other organisations began promoting recipes for Christmas puddings using ingredients from throughout the Empire. In 1926, this idea was taken up by the Earl of Meath, the creator of Empire Day and a prominent booster of imperial sentiment. He organised an event at the headquarters of the Overseas League in London, at which a pudding made of ingredients from a number of British colonies and dominions was mixed with due ceremony. Once cooked, it was to be presented to the King and Queen for their Christmas meal, as (in the words of Lord Meath) ‘a symbol of Imperial unity and an epitome of inter-Empire trade’.

However, New Zealand was one of a number of parts of the Empire that complained that it had been overlooked in the 1926 recipe. This oversight was corrected the following year, when the newly-established Empire Marketing Board took over the Christmas pudding project. The Board  saw an opportunity to use Christmas pudding and royal patronage to achieve its objective of promoting trade within the Empire. It obtained a  Christmas pudding recipe from the royal chef, André Cédard, and set about matching ingredients to products from the British colonies and dominions. New Zealand was represented, somewhat uninspiringly, by 5 lb of beef suet.

The recipe was then publicised widely, including in New Zealand newspapers, and appears to have been a great success for the Empire Marketing Board. In 1931, a ten-ton Empire Christmas pudding was made in London, with New Zealand providing two tons of beef suet. The High Commissioner of New Zealand, Sir Thomas Wilford, spoke at the pudding mixing ceremony, held at the Christmas fair of the People’s Dispensary for Sick Animals. New Zealand, he said, ‘loves to be associated with any movement which spells Empire. … The slogan of New Zealand in regard to Empire is: “Keep the money in the family.”‘ New Zealand was also represented at the fair by a stall featuring New Zealand butter, cheese and honey, displayed under the slogan: ‘You get your money back if you buy New Zealand produce. New Zealanders spend it in British manufactures.’

For New Zealand, this history of being so tightly enmeshed in the imperial trading system has a number of legacies. Pakeha butter was part of a dairy industry built on land that Pākehā had often obtained from Māori through questionable purchases or, in the case of regions such as Waikato and Taranaki, confiscated from Māori following the New Zealand Wars. Though Māori did play a part in the agricultural economy as producers and workers, the great bulk of the profits went to Pākehā. And New Zealand’s continued economic dependence on dairying and other forms of primary production surely results, in part, from the extended period when it was known as ‘Britain’s farm’. This dependence has had significantly detrimental environmental effects, while also leaving New Zealand economically vulnerable. Perhaps Pākehā should have listened to the ‘well-known Auckland Maori’ who, in 1927, contrasted the Māori preference for growing a range of crops with the Pākehā who ‘risked all and everything on dairying, depending solely on butter.’ His comments were reported in the Auckland Star under the heading ‘Hint for the Pakeha: Too Much Butter’.

For Britain, the legacy of being at the centre of imperial trade networks has been one of delusions of former grandeur, a legacy which is playing out now in the Brexit debacle. When I was living in Britain in 2016-17, a number of people spoke to me in apologetic tones about Britain’s decision to join the European Economic Community, and its economic effects on New Zealand. I’m pretty sure butter was specifically mentioned. The assumption seemed to be that New Zealanders might still hold a grudge about this history, but in fact New Zealand has moved on.

The only people still agonizing about the UK’s membership of the European Union are the British (more particularly, the English) themselves. They have been fed on a steady diet of myths about the EU, a surprising number of which concerned food. As the Irish writer Fintan O’Toole observes:

Part of the genius of the anti-European narrative that fed Brexit is that it took all the large anxieties … and concentrated them on objects of consumption. It used food and drink to make these anxieties not tangible but edible and potable.

Perhaps inevitably, one of these fabricated food myths concerned Christmas pudding: it was reported in 1992 that new EU hygiene regulations would put an end to a British naval tradition of stirring the Christmas pudding recipe with wooden oars. But dreams that Britain can again achieve a trading supremacy once possible within the closed system of empire are surely as illusory as tales of dastardly Eurocrats meddling with the great British Christmas pudding.