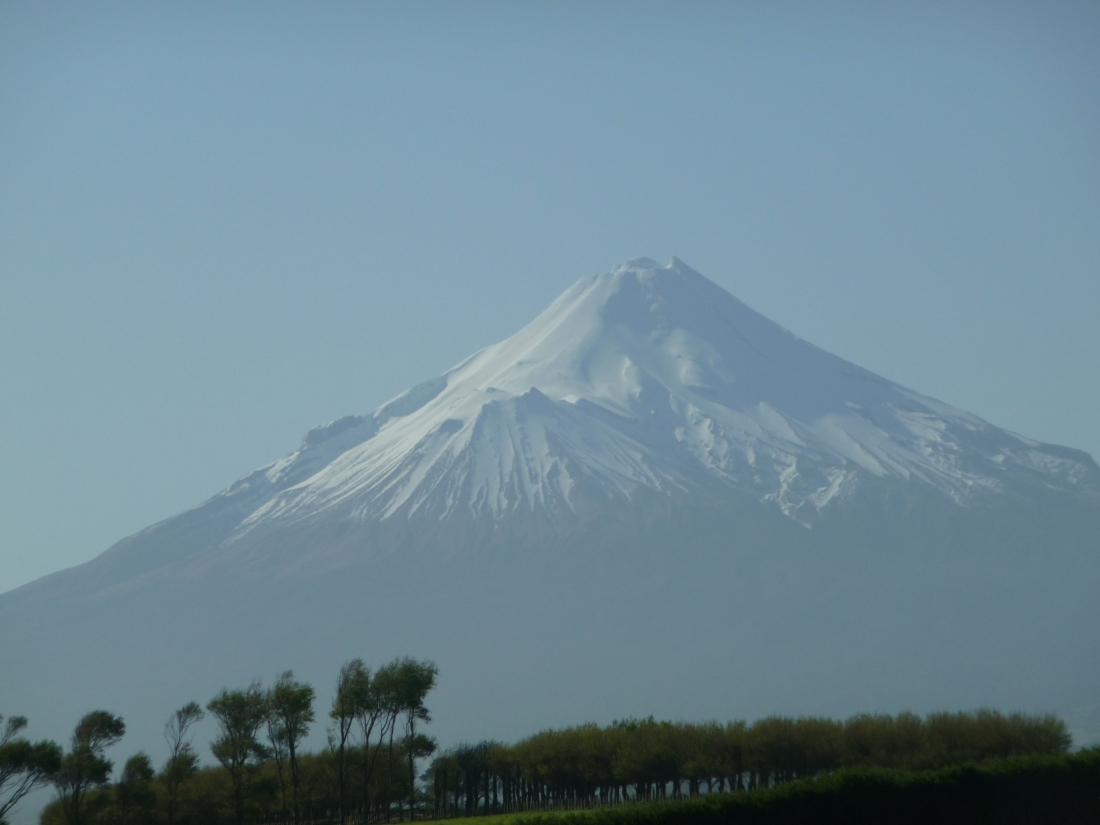 At 5 AM saw for a few Minutes the Top of the peaked Mountain above the Clowds, bearing NE; It is of a prodigious height and its top is cover’d with everlasting snow. … I have named it Mount Egmont in honour of the Earl of Egmont — This mountain seems to have a pretty large base and to rise with a gradual assent to the peak and what makes it more conspicuous is, its being situated near the Sea, and a flat Country in its neighbourhood which afforded a very good asspect — — being cloathed with Wood and Verdure.

It’s 250 years since Lieutenant James Cook, captain of HMS Endeavour, saw and renamed the mountain that Māori knew as Taranaki. Cook named it Mount Egmont after John Perceval, the second Earl of Egmont and First Lord of the Admiralty. Cook never set foot in the Taranaki region, but he was impressed by the mountain, which he likened to Tenerife (one of the Canary Islands) and which the Endeavour‘s botanist Joseph Banks described in his journal as ‘certainly the noblest hill I have ever seen’.

Taranaki was just one of many places given a new name by Cook as he sailed around Aotearoa New Zealand — and plenty of other places were named after Cook during the subsequent colonisation of the country.

250 years later, the name Mount Egmont will finally be disappearing from maps as the result of an agreement between the iwi of Taranaki and the Crown. The agreement will see the mountain given legal personality (in the same way as has recently been done for the Whanganui River and Te Urewera) and managed by a joint iwi-Crown governance entity. It will also result in recognition of Taranaki Maunga (mountain) as the landmark’s sole name. This agreement is the culmination of a long campaign by Taranaki Māori for recognition of the mountain’s original name.

Taranaki Maunga (or Mounga, as it’s often spelled in the Taranaki dialect of Māori) is enormously significant to all the eight iwi of Taranaki. (For any non-New Zealand readers, I should explain that Taranaki is the name of the mountain, but also of the region that surrounds it, and of one of the local iwi or tribes of the region.) Māori from Taranaki view Taranaki Maunga as an ancestor, and their identity is inseparable from the maunga.

Restoration of the mountain’s Māori name had some Pākehā supporters in the first part of the twentieth century. In 1938, the mayor of Hāwera, J.E. Campbell, told a meeting of the Aotea Māori Association that the mountain’s name was ‘a disaster’ and that ‘the old name of Taranaki’ should be substituted for Egmont ahead of New Zealand’s centennial in 1940. This view was supported by the Rev. P. Moki of New Plymouth, who said ‘Taranaki always had been and will be the name for the mountain recognised by the Maori race throughout the Dominion.’

Māori began calling publicly for the name Taranaki to be restored to the mountain in the 1970s, but it was in the 1980s that the issue really came to a head. In 1985, the Taranaki Māori Trust Board submitted a proposal for the maunga to be officially named Taranaki to the New Zealand Geographic Board, the body responsible for assigning official place names. The Geographic Board decided that the mountain’s official name should be ‘Mount Taranaki’, with ‘Egmont’ continued as a secondary name in brackets. There was then a three-month period during which objections to the Board’s decision could be lodged.

The release of the Geographic Board’s decision provoked a furious debate, the intensity of which is hard to believe some 35 years later. There were numerous letters to the editor, particularly in Taranaki newspapers, petitions were organised, and many official and voluntary organisations in Taranaki took a position on the matter. Essentially, the debate pitted a large number of Pākehā who objected vehemently to the Geographic Board’s decision against Māori and more liberal Pākehā who supported it. (Justin Gregory has produced a very good piece for Radio New Zealand looking back at the debate — you can read or listen to it here.)

Ultimately, the Minister of Lands Koro Wetere accepted a revised recommendation from the Geographic Board in 1986, that the mountain’s official name should become ‘Mount Taranaki or Mount Egmont’, thereby recognising both names and allowing people to choose for themselves which they wanted to use. That remains the situation to this day, although in practice it’s clear that use of ‘Mount Egmont’ has declined dramatically, and it seems likely that few will miss the name Egmont when it finally disappears.

The rapid decline in usage of Egmont in the space of a few decades is all the more remarkable given that in the 1980s many Pākehā seemed to feel that the proposal to restore the name Taranaki posed an existential threat to their very identity. It’s not surprising that Pākehā residents of Taranaki should identify strongly with the mountain — anyone who’s been to Taranaki knows how dominant the mountain is in the landscape (at least, on the days when it’s not covered in clouds). Pākehā identification, not simply with the mountain but with the name Egmont had also been reinforced by the extensive use of the mountain’s image and its English name in commercial and organisational branding. As Ian Wedde writes, this was:

a culture for which ‘Mount Egmont’ would soon become an ideal, a symbol of individuality, even of nationhood, appearing on the wrappers of butter, cheese, knitwear, and other products of the region, as well as in a great deal of art.

At the time of writing, this iconography is being explored by the artist Fiona Clark in an exhibition at Wellington’s Adam Art Gallery entitled ‘Egmontiana’ (images are currently available on the Gallery’s website, though presumably only for the duration of the show).

The willingness of Pākehā to use the mountain’s name and image in a commercial context shows how different Pākehā identification with the mountain was from the spiritual connection of Māori. Nonetheless, the meaning of the mountain and its name to Pākehā is worth further exploration. For some time I’ve been struggling with an article I’ve been trying to write about the Taranaki/Egmont name debate of the 1980s. What I’ve written so far is too long and too unfocused, but I’m starting to think that Pākehā identity and identification with place could provide a useful focus for the article.

But what, you may ask, of the Earls of Egmont, whose name the mountain currently still bears? In 1985, when the naming debate was raging, a couple of newspapers sought comment from the eleventh earl, who turned out to be a 71-year-old called Frederick Perceval living on a ranch in Alberta, Canada. The Earl was too deaf to speak on the phone, but his wife told reporters that she and her husband objected strongly to the proposal to replace the name Egmont: ‘You don’t go changing generations of tradition’. The Earl had never visited New Zealand, she said, but people from around the world had sent him postcards of the mountain. ‘Asked if the earl had an ambition to see Mt Egmont, she said he had always wanted to go to Africa.’

The earldom became extinct in 2011, on the death of the twelfth earl, who left no successors.